Be Safe Be Well

Be Safe Be Well (formerly known as Ageing Well Roe Valley) was established in January 2000. The objectives of Be Safe Be Well are to promote the following purposes within the boundaries of the Causeway Coast and Glens local authority, for the following public benefit, the care, health, well being, welfare, interest, advancement, education and social inclusion of;

Be Safe Be Well has successfully delivered many different types of projects since its formation in 2000 , including the completion of a £1.2M Big Lottery Fund Safe and Well project 2010-2016.  The objectives of that project were to improve the health and well being of older people, adults with special needs and men via 6 distinct projects.  The projects included, Safe Home (which provided elderly victims of crime with security equipment and advice in their home), benefits advice for older people, inter-generational projects aimed at addressing the issue of elderly victims of antisocial behaviour, the provision of activities for 90 adults with learning disability which encouraged independence and well being.

During this project BSBW also embarked on a pilot mens shed project, to address the issue of isolation of men in our area. Such was the success of the mens shed project in Foreglen, we opened a second mens shed project in Limavady with the support of local community organisations. Be Safe Be Well was granted £500K The National Lottery Community Fund  to develop the two existing sheds and open a third shed in Portstewart in September 2016. We currently provide five Mens Shed projects in Coleraine (Ballysally & Laurel Hill ) Foreglen, Limavady town and Portstewart .

The Mens Sheds project offers a safe, relaxed and positive environment where men aged 25+ can meet to socialise, strengthen their existing skills, learn new skills, share company and have a project to work on. The sheds currently benefit over 185 men who are retired or unemployed. We also welcome members who may be suffering from a mental health issue, physical disability or have a mild learning disability.  See ‘Our Sheds’ page for further details regarding opening days and times. 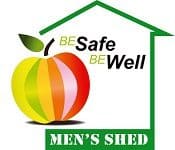